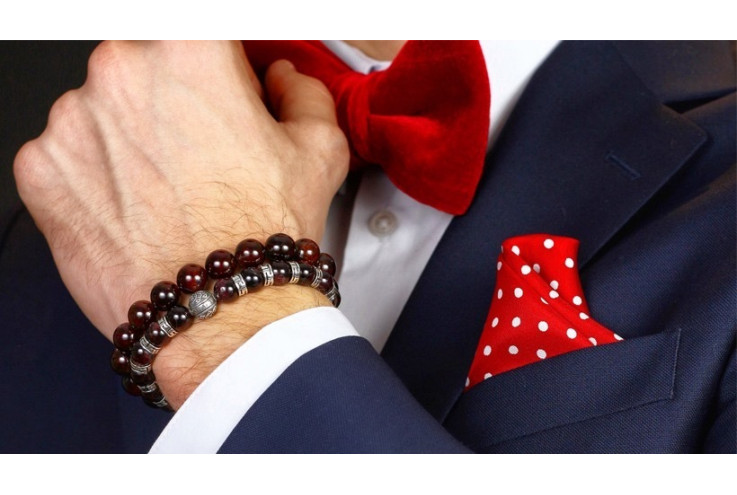 All those we celebrate this January, have a charming beautiful semi-precious birthstone: Garnet, known as the Stone of Health. It awakens the mind to the needs of the body.

According to its red colour, its name is derived from the Latin word “granatus”, which means pomegranate (because of its resemblance to the small round seeds of a pomegranate).

The Red Garnet gained popularity during the Victorian times and it keeps being loved and wanted by all those who want to get rid of the negative energies and feelings. The January Birthstone could be found in a large spectrum of colours: starting from the popular red tone, orange, pink, brown and even vibrant green.

Wearing one of our luxurious Garnet semi-precious beaded bracelets will boost your self-confidence and will improve your creative thinking. Also, this semi-precious stone will clean your body, mind, and spirit.

If you are searching for a gift for someone who was born in January, a piece of beaded jewelry made of Garnet is a great idea because it’s said that a Garnet beaded bracelet will protect its owner from nightmares and danger. Also, you must know that Garnet is a great semi-precious stone for all those who love to travel because it’s said that this gemstone will protect the traveler far from home.

A Garnet beaded bracelet is a must-have for all those who want to achieve and regain their inner balance because by wearing it, they will find out the best way to align with their soul mission. In the meantime, it’s a great idea to wear a Garnet beaded bracelet daily, in those times when you’re feeling stressed out.

Garnet may be the birthstone for January, but due to its charming appearance and multiple benefits, it could be a great gift for all occasions.

All fields are required